Billbugs are a group of weevils in the genus Sphenophorus. They are recognized as major pests of managed turfgrass in the U.S. The larvae of these insects damage a variety of warm-season and cool-season grasses by feeding on the stems, crowns, roots, stolons, and rhizomes.
There are at least 4 species of billbugs associated with turfgrass damage: 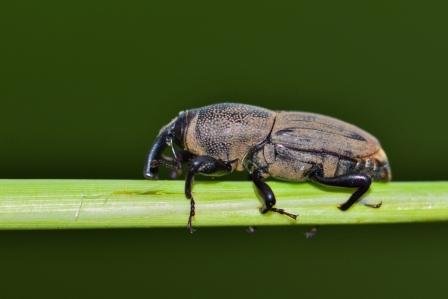 The distribution of these four species overlaps significantly within the U.S. It is not unusual to find two or more species at a single location. For example, in the Midwest, the bluegrass billbug is the most prevalent species. It infests cool-season turfgrasses such as perennial ryegrass, Kentucky bluegrass, fine fescue, and tall fescue. Hunting billbug is the species most frequently encountered on warm-season turfgrasses such as Bermudagrass and zoysiagrass. Lesser and unequal billbugs will infest both warm-season and or cool-season turfgrasses, but infestations occur at comparatively low densities.

Adult bluegrass billbugs overwinter in the thatch, soil cracks and crevices, in piles of plant debris or around driveways, sidewalks and buildings. In cool-season turf areas, they can become active in the spring (April or May) as soil temperatures at the surface reach 65°F. Adults feed by chewing holes in grass stems, but this feeding does not cause significant turf damage. Adult females insert eggs into the feeding holes. These eggs hatch into small larvae. The active larvae bore inside the stems and cause damage. By mid-June, larger larvae will begin to feed on plant crowns below the soil surface. Feeding by these larger larvae causes major turf damage and may kill plants. In mid-July, larvae start to pupate. New adults begin to appear by August. These adults generally feed for a short time and then find a suitable place to overwinter. 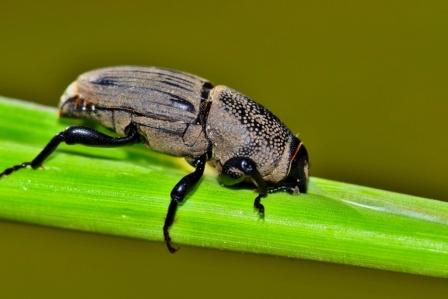 The first visible indications of billbug feeding can be seen by mid-June when individual turfgrass plants start to decline. This early damage will appear as dead spots about 2-3” in diameter. As damage spreads, these spots may come together, resulting in larger, irregular patches of dead and damaged turf.

Consider these products for the control of Billbugs and other insects:

Other insect control products can be found here.

All products are applied with a dry granule spreader. General application timing is May through September. In general, smaller larvae present in the spring are easier to control than mature adults present in late summer. Follow all specific label directions when using these products.