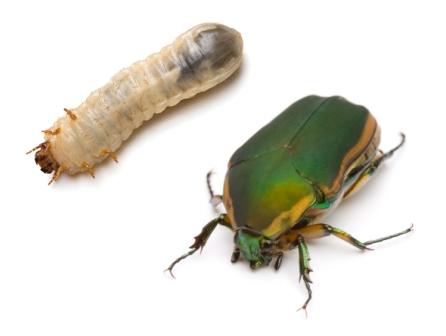 White grubs are the most wide spread and destructive insect pests in turfgrass. Turf is damaged when the grubs chew off the grass roots just below the soil surface. The root injury reduces the turf's ability to take up water and nutrients and withstand the stress of hot, dry weather conditions.

Several species of white grubs can cause damage, including Japanese beetles, masked chafers, June beetles, May beetles and black ataenius.  All of these grubs have stout, grayish-to-white bodies with brown heads. Depending upon the species, the mature grub ranges in size from 3/8 to 2 inches long. Most species are curled into a C-shape when at rest. 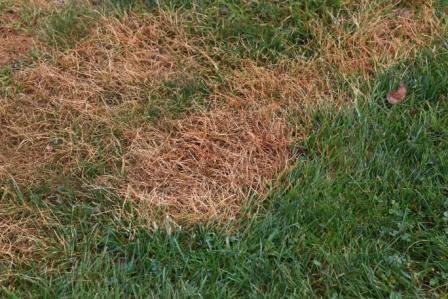 Grub damage is usually most evident in August and September. Early symptoms include gradual thinning, yellowing, and weakening of the turf, followed by the appearance of scattered, irregular dead patches. As damage continues, the dead patches may increase in size, and apparently healthy turf areas may exhibit sudden wilting. The turf may also feel spongy as you walk over the infested area.

Turf that is heavily grub-damaged is not well anchored, allowing you can pull it loose from the soil as if lifting a rug. When you lift the turf, inspect the top 1 to 2 inches of soil for the white, C-shaped larvae. Sampling of potential infestation sites and early recognition of a grub problem can prevent turf loss and costly renovation.

Another indication that grubs might be infesting the turf is the presence of moles, skunks, raccoons, or flocks of birds finding the turf attractive. However, these predatory varmints may be interested in earthworms or other soil insects in addition to grubs. Sampling the lawn is the best way to confirm that a white grub problem truly exists. 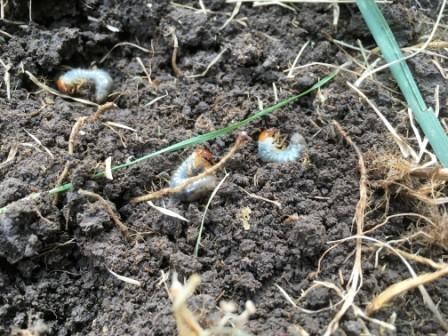 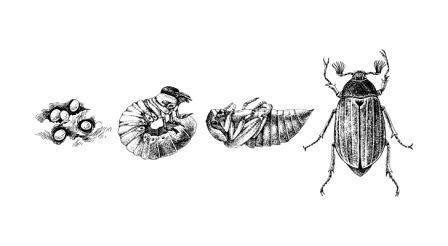 Adult beetles lay eggs in the soil; the eggs grow into larvae (grubs). Depending on the species the grubs may feed in the soil for a year or more. The most effective timing of insecticides is when the larvae are young and near the surface of the soil. This is typically in summer and fall.

In October or November, when soil temperatures begin to cool, the grubs cease feeding and move deeper into the soil, where they lie dormant in the winter. They return to the root zone and resume feeding early the following spring. When mature (typically in late May), the grubs again move deeper in the soil to form an earthen cell, and ultimately transform into pupae. The adult beetles emerge a few weeks later, in June and July, to complete the one-year cycle.

When grubs are abundant, applying an insecticide is the best way to avoid serious damage to the turf. Two different strategies are available for controlling grubs with insecticides: curative and preventive. Each approach has its own merits and limitations. Regardless of the product, post-treatment irrigation should be applied to water the insecticide into the root zone.

With curative control, treatment is applied in late summer after the eggs have hatched and grubs are present. Insecticides used for curative control have relatively short residual effectiveness (usually 2 to 3 weeks or less). Therefore, proper timing is important. The best time to apply curative grub insecticides is in early to mid August when grubs are still small and their feeding damage is relatively light. Grubs are still vulnerable to treatment in late August and September but as they grow larger, they become progressively harder to control and damage to the turf already may be severe. By late September, in response to cooler soil temperatures, some grubs already may be moving downward and out of the treatment zone in the soil.

With preventive control, the insecticide is applied as insurance before a potential grub problem develops. Preventive treatments afford greater flexibility in application timing and are easier to schedule and implement than curative treatments. They also tend to be less dependent upon sampling and monitoring of grub populations. Preventive treatment often affords greater peace of mind because potential damage is avoided or, at least, minimized. Preventive control requires the use of insecticides with long residual activity in soil. Multiple products are available and give excellent control of newly hatched white grubs when applied weeks or months before the grubs have hatched.

Turf managers who use the preventive approach must use a different timing than they would for curative or “rescue” treatments. Preventive grub insecticides are highly effective against young, newly hatched grubs. Applications made as early as April usually have sufficient soil residual to control young grubs hatching from eggs in July or early August. In general, the optimum period for applying preventive grub treatment is mid-June to mid-July, during the month or so preceding egg hatch until the time when very young grubs are present. Preventive grub insecticides are substantially less active against older, full-sized (third-instar) grubs so they are not well-suited for curative treatment in late summer, or after grub damage is apparent.