The ALLIANCE FOR LOW INPUT SUSTAINABLE TURF® (A-LIST®) is a non-profit university and industry cooperative that serves to test, identify and promote varieties to consumers that maintain acceptable turf quality while requiring reduced water, chemical and fertility inputs.

For decades breeders have worked to improve the quality and performance of turfgrass varieties. Breeding often emphasized the level of fertility and water for optimal growth desired by users. However turf managers are having to balance improved variety management practices with environmental dictates. Reduced inputs have become the norm, not the exception, in the world of turfgrass management.

Responsible stewardship of the earth’s natural resources is shifting emphasis toward more efficient turfgrass choices. Sustainability under reduced growing inputs will further enhance the value and contribution of turfgrass. This suggests a research protocol that is more holistic in nature, addressing all factors contributing to a plants health, rather than a narrow focus on a single selected trait. In order to aid turfgrass managers the A-LIST seeks to influence turfgrass breeding by creating trial guidelines and evaluation protocols to identify the best performing turfgrass varieties under reduced inputs and management.

The A-LIST is an independent, non-profit, industry initiative, fostering development of sustainable turfgrass varieties and related products that perform their function with less maintenance inputs, thus benefiting the environment. A-LIST monitors a voluntary evaluation program including metrics like water conservation, reduced fertility and traffic, heat, and drought stress tolerances, all with no fungicide or insecticide applications. Products that meet the acceptance criteria can utilize the A-LIST Approved symbol in their marketing and receive the A-LIST Approved tag for use in packaging.

To insure the integrity and independence of the program, testing is conducted by nationally recognized cooperators, selected on a regional basis to include environmental adaptability. These cooperators also participate on an Advisory Committee to further influence protocols. Participation in the independent and
geographically diverse National Turfgrass Evaluation Program (NTEP) is also a requirement for the approval process. 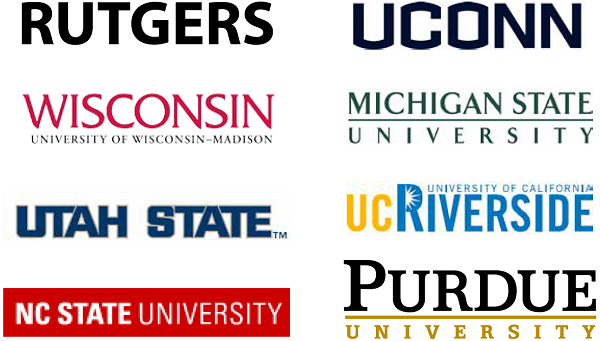 Trials consist of 3 x 5 ft. or 4 x 6 ft. plots. Plots are replicated three or four times in a randomized complete block design. Initial trials were planted in the open. Later trials will be planted under rainout shelters. In the Western USA rainout shelters are not needed because of low summertime rainfall. Trials for all cool season turfgrasses were planted in the fall, except for the West Coast perennial ryegrass trial which was established in the spring of 2015.

No fungicides were used except for Pythium control if necessary at establishment to prevent seedling tamping off. No herbicides were used except a single application of mesotrione at establishment if necessary to prevent weeds in seed bed. 1.5 lbs. of Nitrogen/1000 sq. ft. to start, 1 lb/1000 sq. ft following spring unless Best Management Practices for low input turf in the state differ (as determined by the university cooperator). Mowing height used is appropriate for species and region.

Evaluation of summer stress tolerance was initiated approximately July 1 (cooperator’s discretion regarding local climatic conditions). This timing allows for evaluating the combined effects of both heat and drought. Irrigation was withheld until the last plot(s) have reached 25% green cover then the trials are re-watered. In the Western US plots were maintained at 60% ET during the summer months.

• Record of temperature and evapotranspiration (ET) rates for each trial location.
• Turf Quality: Monthly visual rating throughout the year on a scale of 1 to 9, where 9 represented the most desirable turf quality.
• Density: Recorded digitally every month after turf is established.
• Percent Green Cover: Recorded digitally every month after turf is established. During dry-down period % green cover will be recorded a minimum of once per week. Withhold irrigation until the last plot(s) have reached 25% green cover then re-water with an initial 2 inches of water followed by one inch per week watering.
• Recovery Time: Time to 100% green-up recorded digitally a minimum of once per week.
• Additional Data Collection: Other data like disease ratings, etc. was collected at the discretion of the cooperator.
• Analysis: All data were subjected to analysis of variance and means then were separated using Fisher’s protected least significant difference (LSD) test at p < 0.05.

Promising Varieties
Varieties denoted as ‘promising’ are grasses that did well for both drought tolerance and turf quality in the first year of the trial(s) by meeting all of the standards for approval (except two seasons of field data i.e. they lack two years of field data) in at least two locations as required for full approval. Status as a ‘promising variety’ does not guarantee final approval. Promising varieties are reevaluated after the second season of field data and must meet all of the standards of approval.

Approved Blends
All blends that carry the A-LIST approval must be comprised of:
• A minimum of 65% approved varieties
• The remainder must be bonafide turf varieties (no forage varieties, no ‘variety not stated’ material, no uncertified common varieties).
• Must include the A-LIST Approved tag.