The beauty of a lawn or professional turf can be quickly destroyed by brown patch, which is a fungal disease caused by a single species of fungus, Rhizoctonia.  Brown patch is a fairly common disease in the turf world, but with the right understanding, it’s also rather simple to diagnose and treat before any serious damage occurs to the turf.

Rhizoctonia can affect all cool-season turf, but it is especially harmful to ryegrass and tall fescue.  Kentucky bluegrass and fine fescues can occasionally be affected, but the damage is usually minimal in these species.  Brown patch can also affect a variety of warm-season grasses, including St. Augustine grass and zoysiagrass.   Most importantly, Brown patch is a foliar disease, meaning that it harms the blades of grass but not the crown of the plant or the root system.  Often times, turf infected by brown patch may recover completely on its own without the need for chemical treatment.

The symptoms of brown patch vary proportionally to the mowing height of the turf.  In landscape situations, where mowing height is greater than 1 inch, brown patch appears as roughly circular patches that are brown, tan, or yellow in color and range from 6 inches to several feet in diameter.  The affected leaves typically remain upright and there are typically lesions on the leaf blades that are tan in color and irregular in shape with a dark brown border.  When the leaves are wet or humidity is high, small amounts of gray cottony growth, called mycelium, may be seen growing on the affected leaves.  In close-cut turf (1 inch or less), brown patch develops in roughly circular patches, ranging from a few inches to several feet in diameter, that are brown or orange in color.  Distinct foliar lesions are not visible and mycelium is typically not present, but a black or dark gray ring, called a “smoke ring”, may surround the brown patches.  The smoke ring is evidence of the disease being active and is only present when the turf leaf blades are wet or the humidity is near 100%.

The Rhizoctonia fungus may be present in the soil for quite a long time before it manifests itself as the full blown Brown patch disease.  The fungus overwinters in the lawn grass or soil beneath in the form of fungal bodies known as sclerotia and it can survive for years until conditions are right.  Rhizoctonia is most likely to cause Brown patch during the periods of high temperature and high humidity in mid- to late-summer when night-time temperatures remain above 68 degrees and daytime temperatures are routinely in the 80 degree range or higher.  Periods of rainy weather when the air is saturated with moisture also promote the appearance of the disease. 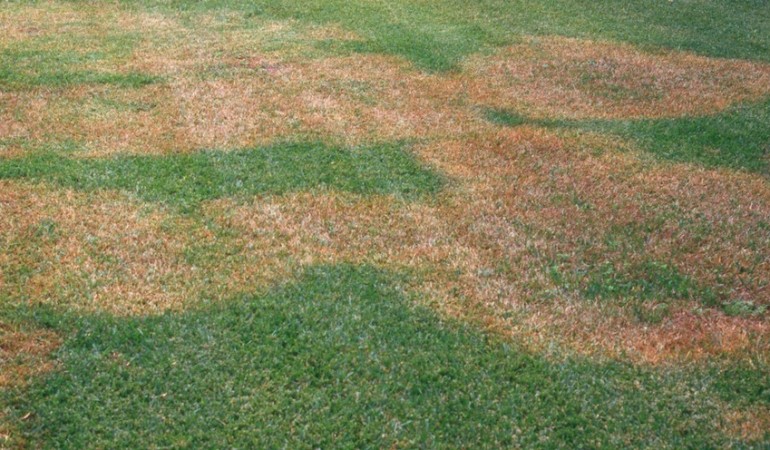 Some of the conditions that are conducive to Brown patch are beyond reasonable control.  Air temperatures and humidity levels may cause the turf to develop Brown patch no matter what a turf manager does.  However, you can minimize the chances for developing Brown patch with a few common sense tactics.

The decision to apply fungicides should be evaluated on the value of the turf.  Fungicides are somewhat expensive and, many time, do not justify the cost of utilizing them on a disease like Brown patch that will likely not cause permanent damage.  It some cases, however, it’s completely warranted on professional turf situations such as golf course putting greens and fairways.

Home lawns are a completely different animal.  Fungicides can be difficult to rely upon for controlling brown patch in the home lawn setting, but regular applications can vastly improve appearance.  A good rule of thumb to follow on either cool- or warm-season grasses is to initiate fungicide sprays when nighttime low temperatures reach 60 °F.  Stop applications when nighttime lows are forecast to be below 60 degrees for five consecutive days.  Typically, applications are made at 14- to 28-day intervals, depending upon the fungicide.  There are numerous fungicides that will provide excellent control of Brown patch.